As I am writing this I am filled with nostalgia as I reminisce about those scary days of old when just the mere mention of HIV/AIDS would drive us all into a tailspin of panic. I’m talking about those days of the imagery of the tombstone and death that was synonymous with the AIDS. The times when as soon as someone looked like they were losing weight the rumour mill will go into overdrive.

Anytime they asked you to “buss a lime” with them you either would be working late, have to look after children that you don’t have or was suddenly sick. Basically, you would make any excuse not to be in their company. It was also surprising just how speedily other people’s diagnosis mattered and people (including healthcare personnel) couldn’t breach confidences.

Thankfully, we have come a long way since then. That’s not to say the stigma is no longer there, but awareness means that we are less daunted by HIV/AIDS and now able to lose weight without fear of being labelled, which is a good thing given the focus on reducing levels of obesity.

December 1 is now a day that means so much to so many people across the world as it marks World Aids Day. This year UNAIDS will be launching the My Health, My Right campaign to reinforce the point that everyone has a right to health and that is not just about the physical health but also mental and emotional wellness.

The message is particularly pertinent to the many vulnerable people who for one reason or another fail to look after their health. Nigel, a young vagrant/street dweller was helped by a kind-hearted, socially conscious woman who was concerned that he was being exploited. His story is that at one point in his adolescence he had been a drug runner and the consequences of incarceration then had a devastating effect on his health. It’s not known whether he contracted the HIV virus before or after his time in the young offenders institute, but he tells a harrowing story of the treatment or lack thereof that he received, and he attributes much of it to the fact that so many people jump to conclusions and pass judgment about him. 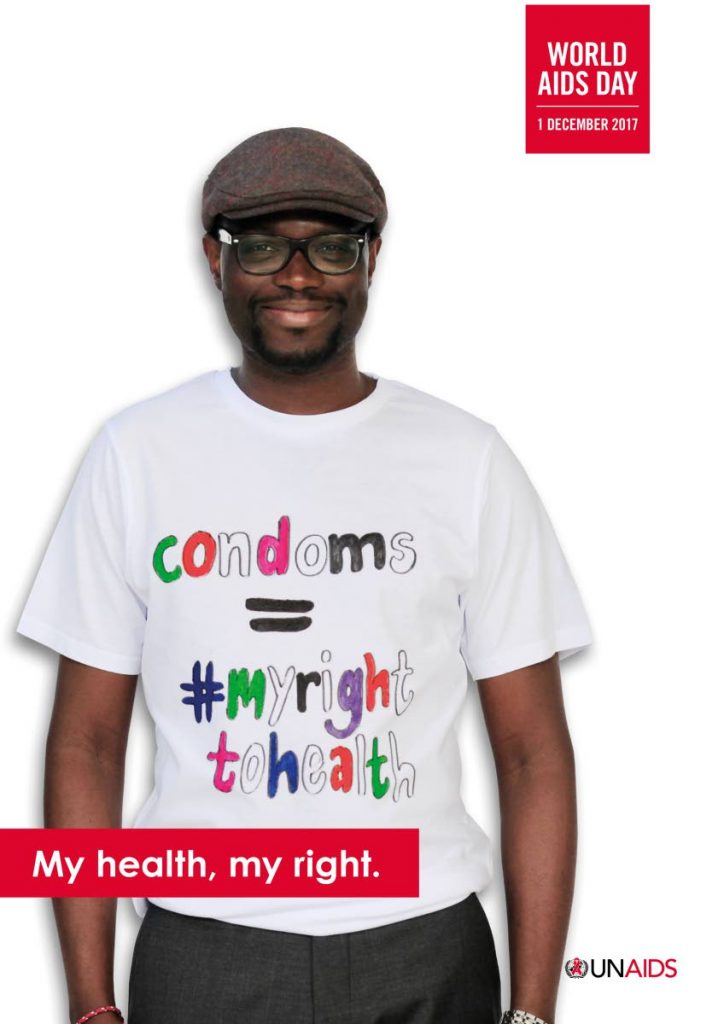 Upon release he was ostracised, his physical and mental health neglected, and did not access any sort of support. His overall well-being spiralled out of control, his clothing was dirty and had seen better days, and if I was a betting person I would stake a wager that if he tried to go to the clinic he would have been treated with derision and scorn.

In such circumstances, how do the Nigels of the world – those very vulnerable young people access the support needed so that they can improve their health outcomes? This is all part of what the My Health, My Rights campaign is about. Amongst other things, it is about access to quality health services and medicines, but also about the other things that impact on health outcomes such as housing, working conditions, sanitation, finances, access to justice and strong social structures.

As we all like a happy ending, I’m pleased to say that Nigel is receiving the care he needs, he has access to the medication required, has recently been provided with a counsellor, he has a part-time gardening job and he is no longer living on the streets. He has told “Aunty”– the person who initiated his turnaround that he has been using the outdoor gym equipment in the local park and brags that he can do 120 push-ups. He no longer eats other people’s leftovers and is now on a high protein diet to help with his fitness regime.

Thank you to the many “aunties” who help youngsters to be able to exercise their rights, and take a level of control over their health outcomes, and as we celebrate World Aids Day on Friday, let’s try to reach out to more of our vulnerable youth.

Dr Yansie Rolston FRSA is a UK-based disability and mental health specialist advisor. She is a social strategist and trainer who works internationally at various levels of government, business and civil society. Contact her at yr@efficacyeva.com

Why not share! These icons link to social bookmarking sites where readers can share and discover new web pages.

Engaging with and Valuing all Abilities

@Morton1867 There are cultural reasons for not using “died” eg in some traditional African spirituality practices the belief is that the person has “passed on” or “transitioned” from this earthly realm to the realm of the ancestors.

In Karkow in Poland as part of @ubeleinitiative capturing feedback from displaced African students from Ukraine to assess their needs& develop a campaign to influence government, universities, philanthropists, media and public to support them complete to their education in the UK pic.twitter.com/MwX6vnKSUR

@Yvonne_Witter Seasoned with jerk sauce and eaten with a generous serving of red pepper hummus and a side of rocket. Yum yum

Looking for a venue in central london that hold around 40 people for a Documentary screening and a Q&A on Black Women and Grief. Any suggestions?

🧵My PhD research explored white trainee counsellors understanding of race, racism and whiteness. In this article for latest edition of @BACP Therapy Today, I present my concept of the "Good White Counsellor" which encapsulates my findings 1/ bacp.co.uk/bacp-journals/… pic.twitter.com/9hgtL96i3Y

1/ Trauma, War and Racism Monday 4th April 2022 6- 7.30pm Whist we acknowledge the phenomenal outpouring of support for Ukraine since the Russian invasion began, many Black students have described a very different and traumatic experience. pic.twitter.com/9WwJsQq7ez

#DayOfReflection On Wednesday 23 March, in collaboration with @MajonziFund, we're hosting the #UGiveHope event at Conway Hall to support & uplift the Black communities affected by Covid-19 and those who have been bereaved during the pandemic. Join us! lght.ly/9a0n23i

Passionate about reducing inequalities across the UK with a focus on #Maternity & the #EarlyYears? Then join our growing team @BestBeginnings. Find out more about opportunities for you to join our Team & Board. Apply here ➡️bit.ly/OpportunityToJ… #CharityJob #WeAreHiring pic.twitter.com/hVzcM6K9ff

Efficacy EVA is a Community Interest Company. Donations allow us to further our aim in providing solutions to complex social challenges.